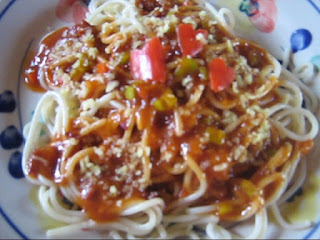 To tell you the truth, it's my husband who does much of the cooking around the house. I believe he cooks better than I do. And faster, too! If you want me to cook, you better give me a lot of time so I can do it pretty good. When husband is cooking, he would already heat the pan or start the cooking right away while he is also busy cutting, slicing or preparing the rest of the ingredients to his recipe. He's definitely an ideal home chef! As for me, I like to have everything cut, sliced or prepared ahead before I turn on the heat and get everything started.

Yesterday, when there was power interruption, I decided to make spaghetti for all of us. I thought it would be a perfect pre-Valentine's Day treat! I especially made my husband's spaghetti plate extra special by carving out small hearts by knife from the red bell pepper. I secretly carved it out when he did the errand to buy the can of spaghetti meat sauce. So, when I served him his spaghetti plate, he was like surprised to see the special hearts that were on top of his spaghetti. I guess he appreciated it but still acted like he didn't. He mustered a smile and made the nicest comment about the three hearts. He said that it looked like some caveman did it because they were perfectly carved. Yeah, right! :-)
at February 09, 2010 4 comments: