In line with the Department of Health's immunization program for children between nine months to eight years old, my little girl received her measles/rubella shot on April 29th. Even though she's been completely immunized already with the MR vaccine when she was under a year old, I did not hesitate to let her receive immunization again because I have paid attention to their campaign on television and got myself educated that it's still okay and safer to get another shot. I thought they'd never make it here in our place because it is almost the end of their door-to-door immunization campaign but I am glad I was wrong.

Anyway, I got to tell you how brave my daughter was. I could hear the cries of some toddlers in the neighborhood when they received their shots but my daughter didn't shed a tear. Yes, it's the same painless reaction all over again when it comes to the needles. In fact, she just watched how the needle entered her skin. Not quite like her mom, eh! 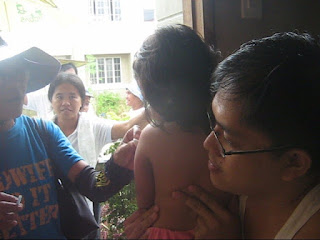 It's funny because I was scared she would shriek in pain that I chose not to hold her. Anyway, glad I grabbed the camera and took a video of it. You'll have to excuse her not wearing anything on top because she took it off. It's summer here and the temperature is just too hot (It started to rain though as we entered the month of May). She was actually playing and running around when people from the Department of Health entered our home. Aside from the vaccine, the health worker gave her a drop of Vitamin A. We were also given a chewable deworming tablet for her to take at night time.