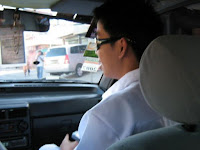 “Always too soon to quit. Never too late to start.” – Anonymous

If there is one thing I would like to say to my younger brother today, it would be that quote. It is indeed never too late to start again more intelligently.

The results of the November 2008 Philippine Nursing Licensure Exam was already released by PRC last Friday, February 20, 2009. Sadly, brother’s name didn’t make it to the list of those who passed the said examination. I have been praying to God that he would make it to the list but I guess I didn’t pray hard enough. Brother didn’t pray harder enough. I guess he also needs to work his ass off in order to achieve his goal of adding the title “RN” after his name. You see it’s not just prayers. And it’s not just luck. Diligence. Patience. Sacrifice. Hardwork. Along with a strong faith in God and His kindness, these are also the qualities that would help a man get to his goal. God helps those who also help themselves.

So to my brother, I say, don’t you ever quit! There are lessons learned. And there are second chances. Don’t let this get you down. Rise up from the fall. Someday you will be what you hoped to be.
at February 21, 2009 8 comments: