a coffee-inspired life, anyone?

I ran into this beautiful video presentation about seeing life through a cup of coffee. I'd like to share it with you guys so we can all have a coffee-inspired life. :-)

I guess, at some point, we are guilty for choosing the best cups even if what we really wanted was the coffee.

Today, I resolve to enjoy  my coffee everyday even when they are not served from the best cups! Care to drink with me?
- August 27, 2010 7 comments:

there is joy in living

How do we find joy in living? We all know that money cannot really buy true happiness. Happiness, for me, is something that keeps us from wanting and longing for so much more in this life; that we are already content with what we have achieved. We may have failed in other things but we have learned to accept that we are not perfect. That we are capable of making a terrible mistake but we are able to forgive ourselves for it; that we can excel at some things but can also be weak in other things.

You see, life is more than just money. Life is all about relationships. Most affluent people we know aren't really happy with their lives. They may be rich and have a say in the society but if they have made their wealth as a measure of their success, they will find that there is no meaning in their existence. They will always feel empty inside. They will build mansions or invest in properties but will feel paranoid that people have vested interests in their fortune and so they start to build walls. Everyday they worry about their lives. They worry about security. They live in abundance but still can't truly be happy. 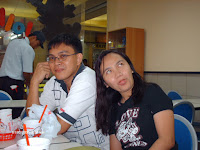 One great thing about being married is having a partner to share your troubles with although some would say that you wouldn't also be into some kind of trouble have you not gotten married haha. I'm not saying that married life is all about troubles and problems of some sort. More than anything, marriage gives you that certain kind of happiness-- that is, if you really are meant to be married after all.

I believe it will just come to a person. And it wouldn't matter how short or how long the relationship had been going. It will just hit you. The time when you think that both of you are ready and wanted to be with each other for the rest of your lives.

In one of our conversations, my sister had asked me, "Don't you two even argue?" We argue less, but yes we do argue but we make it a point to stay out of the boiling point. Sometimes when it's close to getting a fight, one of us would opt to stay calm. I would also remember to read again mom's letter for both of us. And then I would be reminded about our happy times together. It would then be so hard to stay mad or angry at the man I chose to love and marry.

Stephen and I--we were not born rich, financially. We work to earn a living and to be able to pay for our existence. But together, as husband and wife, we are looking forward to improving our lives to create a better future for our family. And yes, as the Carpenters song goes "We've only just begun..." Our married life is way too young compared to those marriages that are already "tried-and-tested."

Hmmm, I just noticed I talk or write about my husband a lot. I usually do this everytime he's asleep. And he sleeps like a baby! I feel like joining him to bed already. So, like Cinderella, I better be in bed before the clock strikes twelve. I'm turning Sleeping Beauty now. Goodnight.