Showing posts with the label human karaoke machine
Show all

they call him human karaoke machine 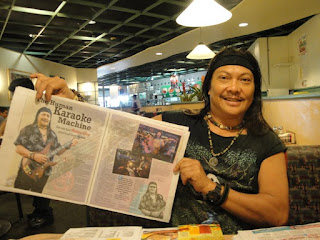 Just recently, I saw photos of my Tito Manny (my late mom's brother, one of the characters mentioned in  fascinated with words post) in Facebook. All I can say was, "Wow! He's in the news!"

As far as the photo goes, he is holding a write-up about him where he's called a "human karaoke machine". Well, it's basically because he performs and entertains as a one-man band. I wish I have a copy of that paper. I tried to search for it online and I was able to read it only from Google's cache because the link was no longer working. I think I'll have to pay a few dollars to be able to read and print a copy of it. Anyway, I think I very well know his story, especially his humble beginnings. After all, he's my uncle!. :-)

Hmmm.. would you believe he's already 50? Anyway, he doesn't look like he is.