It's  funny how dropping some EC's have led me to read some misunderstandings over the Internet and then eventually led me to do a little charity work. I say "little" because I wished it was within my means to have given more for a wonderful cause. I have realized that somehow something good came out from some arguments over the Internet. :-) I just  followed their stories and felt a little sad about how things went with them the past week or so.

Anyway, like I said, if there was anything good that resulted from following some stories, it was because I have bumped into a post about the homeless widow and three children. I got touched by the story and wanted to pitch in some help. I know my donation was just a little amount but it was sincerely given from the heart. Well, they say the house was not fully made up yet. So, if anyone is curious about the "Heavenly Project" and its updates, just click right through this beautiful blinking badge and you will be directed to the site hosting this project.

They gave that blinking badge (also a labor of love) to me after I sent my humble donation. And oh, I also got this Letter of Commendation. 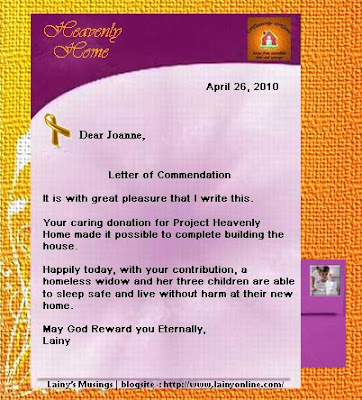 Today, I realized that it doesn't really matter if we differ in some stands or opinions. If we can agree to contribute to a beautiful mission like this, then this world will become a better place. So, if we could help out on this project, there would be one less homeless family in the world. Isn't that a good thing?
- May 01, 2010 6 comments: