Last Saturday, we went to attend grandmother's funeral. It was one hot afternoon but the heat was tolerable since our aunt hired a bus to get us all to the cemetery. We were told that she actually hired two buses; so, me and my family (dad, me and my sister, husband and kid) chose to ride on one bus with less people still on it so we can be comfortably seated. However, after we went a few kilometers and stopped at an unexpected destination, we realized that we didn't know the rest of the people that were on the bus. It was then clear to us that we were on the wrong bus! Thanks to SMS and mobile technology, we were able to communicate with my other two siblings. Fortunately, the bus that they were on was still coming; so eventually, we were able to ride on the right bus. Even in times of mourning, some circumstances such as this happen so that we can see the funny side of life. In fact, I have also recalled that in another funeral we have attended some two years ago, we have also experienced one funny situation wherein we have mistakenly eaten the snacks served by  another bereaved family who mistook us for their relatives. Boy, were we embarrassed but it's a good thing that they didn't notice the blunder we made; so, we quickly got ourselves away from the wrong crowd. :-)

Going back to the topic on grandmother's funeral, I was really touched by our aunt's eulogy. When she recalled and said a lot of good things about grandmother, I also remembered my late mom's character. How my aunt described our grandmother was almost exactly how I would describe my mom as a mother when she was alive. When it was my turn to say my piece, I wasn't able to completely get all my thoughts together but I was able to thank my grandmother for everything that she was when she was alive. What I am today is also partly because of her because she has raised our mom so well that she was also able to impart her parenting skills to us.
at December 04, 2012 No comments: 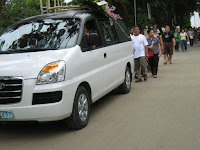 "Oh, honey when I die
Dress me up in a coat and tie
Give my feet a pair of shoes
That I haven't worn in a long time
Put me in a golden box
Not a cross on a pile of rocks
Bury me where the grass is green
And the gates are shining..."

The quoted text above is the chorus to the lyrics from a song entitled "Poor Man's Grave" by a band called the Eraserheads. The melody to this song is so good that I can't help but sing along; however, if I would have to look deeper, it would cause me to think "is it really necessary to have a grand funeral"? I believe it wouldn't matter anymore when we're dead. However, the fact remains that it is important for most families to bury their dead with a decent funeral. It's like a form of last respect for a dead loved one. Personally, I came from a family who didn't have the benefit of a good insurance. I remember when one would get sick, we can't expect dad's insurance benefit to cover all the medical expenses. In fact, when mom got hospitalized and was diagnosed with brain aneurysm, we were really a helpless family, financially and emotionally. The company insurance benefit that I had when I was still working in an office won't be able to help her because only the spouse and children are covered, and parents aren't. Fortunately, since family will always be family, my mom's sister helped out and almost shouldered everything, from hospitalization down to funeral expenses. I was thinking won't things have changed if we have considered getting a funeral insurance when we still have more years to prepare for it? Isn't it a good idea to be prepared so that when the reality of death happens, loved ones or the surviving family will no longer have to worry about looking for money so we can have a decent burial? Oh well, if it is something that we can afford to pay monthly, why not? However, if the family budget will not allow it, then we probably have to be content with the kind of burial that the family can afford.
at April 22, 2010 5 comments: