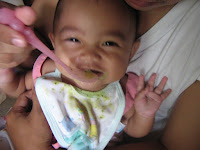 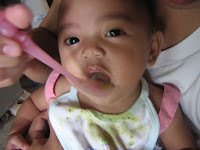 Right on her sixth month, we started feeding Dipdip with baby cereals, her very first solid food. Following the pediatrician’s advice, we began with just two to three tablespoons of the cereal to check and see how her body would react to the solid food each day and to make sure also that she will not have any problems with food allergies. After that, we can gradually increase her intake as soon as she gets used to the solid food that was introduced to her and especially when she begs for more.

We’ve been warned not to overfeed though. We will have her try different kinds and flavors of cereals, one at a time. So, aside from taking her milk supplement, she will have baby cereals three times a day for her breakfast, lunch and dinner. I was also told that we should make sure that she didn’t take her milk two hours before her scheduled feeding so that she would still have some appetite for the solid food. Right now, she’s still trying to like eating her cereals. It’s such a mess when she’s being fed but it’s alright because she’s still trying to get to know her food. As with my first experience, not only was she messy, she would also try to grab the spoon that I used to feed her on. I wasn’t prepared for it, and so she succeeded and had a good grip of the spoon which she immediately put in her mouth. Thankfully, I was able to retrieve it back from the female baby version of Robin Hood! LOL
at October 01, 2009 5 comments: