a blog sendoff to elder brother

As I am writing this now, my elder brother may still be up on the plane heading to Abu Dhabi. Yes, he is going back to where a job opportunity awaits for him. So many times he tried applying for a job here because he didn't really intend to leave the country again but it seems like he is destined to come back to where he started. With all that he has gone through in this life, I am sure he is a lot wiser now. In fact, before he left, he told me he's going to save money so he can have someone to plant some cacao and lemon seedlings on our late mom's share of the land from our late grandfather. Working abroad is probably not something he sees as a lifetime job. After all, just as life itself, nothing is really permanent when it comes to the world of employment. Nothing is really certain. Thus, I commend him for having thought of collaborating with us siblings to make sure that mom's land will be put to good use one of these days.

This blog post comes with a prayer that one day he will reap all the fruits of his hard labor and sacrifice. I pray that he is going to make it BIG one day that he will end up thanking, praising and glorifying God even more for all that he has been through and has become. 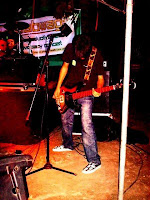 I just noticed the date today - it's my rock star brother's birthday! Somehow, I felt guilty because I wasn't very nice to him when we communicated via Yahoo Messenger today and I totally forgot about his birthday. Had I realized earlier that his birthday is coming, I would have avoided being in an argument with him over something. Anyhow, I'm looking for something to make it up on him. I guess one of those excellent guitars for rock stars should be a good peace offering, right? Surely, he would love to create and play good music with it. Oh, how I would love to  support him as a musician! I'll see if he is still with his band and if my funds are already enough to cover the purchase; otherwise, I would have to call and greet him, instead. :-) Happy birthday, brother! You rock!
- January 26, 2013 No comments:

My elder brother arrived from Abu Dhabi today. I think it has been 3 years since we last saw each other. As a sister, I would have wanted to go with the rest of the family to fetch him at the airport earlier today. The thought of seeing him again (plus the presents that we call "pasalubong" *wink*) is already enough to excite my thoughts. However, since it's a work day and I still didn't have any leave credits yet, I thought I would need to put off seeing him until my working hours are through. I forgot to mention that I also needed to wait for my husband because we are going together to the restaurant where my brother and the rest of the family were waiting. Suffice is to say that my excitement in seeing my brother back again got extended for several hours. Can anybody relate to that?

Anyway, when we get to finally see him at the restaurant, I didn't quite expect to see a reaction that seems to show that he was more than excited to see me. Well, it is probably because he has already drank several bottles of beer with dad, my brother and my sister's boyfriend before me and husband finally turned up. I didn't realize just how much I miss talking to my brother. Sure, there's Facebook and all other types of tools that are meant to provide communication but, somehow, it is really different when you get to talk and physically see the person.

So, there. Finally, brother has gone back home with lots of stories to tell. However, it was already late and he already looked like he could use some sleep, so we already said our goodbyes. We will be seeing him back this weekend at my father's place in the province and it will be a long journey. Of course, we didn't leave empty-handed. Aside from his wonderful presents, I also received something from my classmate way back in the elementary who is also working in the same place as my bro. It's funny how I got her to send me those chocolates. I think it has only been two days ago when I jokingly asked her on Facebook if she would like to send me something through my brother. And she did! Wow, additional blessings. Indeed, it was like "Ask and you shall receive." :-)

on happiness is not a fish... 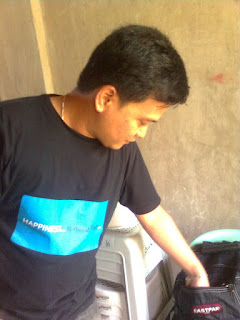 A whattt? My elder brother's shirt reads "Happiness is not a fish..." If you ask me, it's like a strange description of what happiness is not.

Do I think so? I am actually not sure. What's running in my head right now is that we all have a different way of seeing and feeling true happiness. Some people may find it easy to catch a fish and they're already fine and happy with it. Some find it difficult as well. However, for some people, happiness cannot be compared to catching a fish and neither can it be measured by the type of fish being caught. :-)

Oh, in any case, it doesn't matter if we don't know what happiness is not. As long as we know what happiness is. This post may sound crap but I am actually surprised because I like the way I am thinking right now. Caffeinated thinking... LOL. I hope this will not be grounds for me to get stripped off the two "Substance Awards" that I just received recently. Speaking of awards (Mashkan Award and Substance Award), I have yet to do them on my subsequent posts. So, stay tuned for that!

In case you are wondering why I am pondering about this happiness and fish thing, it is because July 14th is my brother's birthday. This is just my way of remembering him on his birthday...
- July 14, 2010 7 comments:

it was a good friday!

Good Friday, it was indeed! I just can't help but rejoice last Good Friday not only because of what the observance of Holy Week meant to us but because my brother from Abu Dhabi arrived on that day. After two years of not seeing my elder brother McAldz, I sure did miss him. We were very glad he was finally allowed to go on vacation. Well, what can I say-- he's still the same funny brother that I've written about in one of my February 2009 posts, who didn't quite know how to use his facebook account yet :-). Yes, he has a facebook account but he's not the one updating it, it's my other brother J. I guess I'm going to have to spend some time to teach him how to do it. 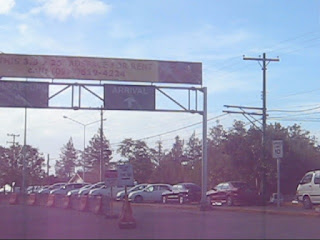 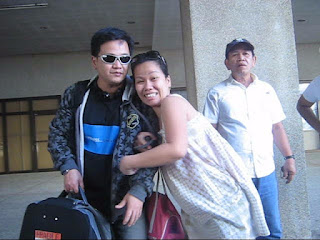 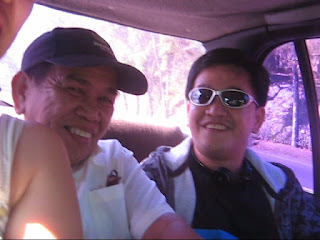 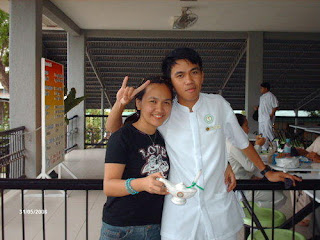 After all the many things I've written about my brother Jason, I still feel like writing about him. Brother J had been my long time boardmate or housemate for many years before I got married and lived with my husband. In all those years where I became her guardian parent when he was still a student, I guess you can say that we've put up with one another, hehehe. I guess at some point (or shall I say 'at times') I was the typical 'overprotective' sister that most siblings would not dare wish to have. During my time, back in my student years, I've never really fooled around. I was the typical student and a home buddy. Sure, I have friends but they're also my kind. So, when it comes to brother and my younger sister, I thought it would help them be in the right path if I act as their sister disciplinarian but then I realized that this has not really helped at all, especially with my brother, because most of the time they would end up hating me for it. I'm not saying I'm not close with my siblings, though. It's just that there are lots of things that we disagree on. Let's probably just call it generation gap. Today I'm not wishing for anything more for my brother J but for him to fulfill what he wants to achieve in life. Now that he's not living with me and is now in another country, I was very happy when he told us that his biggest achievement is is his faith. So, to my brother, keep it up! Rock n Roll!
- February 09, 2010 3 comments: 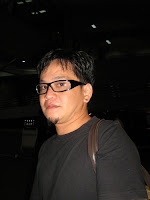 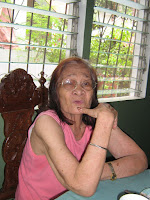 My brother McAldz has been working in Abu Dhabi for almost 3 years now. Even though he's got a job there, it's not a job which afforded him some luxury, which explains why he would hardly make overseas calls to us. On one special occasion, he thought of calling our grandmother to check on her. He thought it would be a beautiful conversation with grandma considering that it had been a long time since they caught up on each other. However, instead of getting a good greeting from the other end of the line, he didn't expect to hear an angry voice.
Grandma: Wa ko nalipay sa imong gibuhat!
(Translation: I am not happy with what you did!)
McAldz (puzzled): Ngano man 'la, unsa diay akong gibuhat?
(Translation: Lola, why, what did I do?)
Grandma: Nganong karon pa man ka kahuna huna ug tawag nako?
(Translation: Why have you thought of calling me only today?)
LOL. I really found it funny when brother relayed this to me because he really thought he did a really major offense! Well, come to think of it, our elders are sensitive when it comes to affection and they would really appreciate our thoughtfulness. So, I guess, brother really did a major offense. And the rest of her grandchildren who forgets to find time to call her are guilty as well. :-)
- February 07, 2010 3 comments:

Today Is My Bro's Birthday 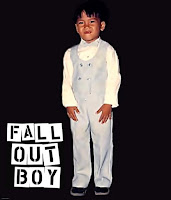 Today is my brother's birthday! He's in Bahrain, so we couldn't be with him on his special day. So, as our birthday treat, we just made a simple video greeting courtesy of animoto and youtube (we didn't spend a penny on this one but you know it's A for effort hehehe) to greet him a happy birthday. 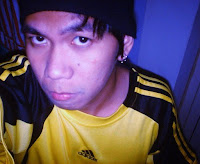 And as another birthday surprise, I will share to you mom's journal about him when he was still 8 years old.

Jason, my youngest son when he was eight and one of his classmates became mortal enemies. I don't know why but I always hear them to be having boxing bouts everyday on very trivial things. This I've learned whenever he's home with cuts or bruise, sometimes only a scratch to indicate he has won at times.

One time, according to Jason, her Lola (my mother's sister-in-law) saw them fighting across the street. He was scolded and they were stopped and separated at one moment only to be surprised when her Lola then moved them back together and shouted "Okay, fight!!!" And they stared at her.
- January 26, 2010 6 comments: 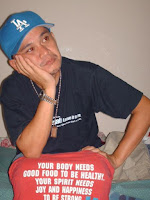 (Just a short but funny recollection of brother McAldz. This happened years ago but everytime I would remember about this, still puts the same smile on my face. :-))

Back then, our eldest brother didn't know much about Internet and stuff. The first time he was introduced to the Friendster network, he was very happy and sent SMS to everybody he knows with this message "Please add me - jules@yahoo.com, password 'bryant'". You have guessed it right, the next lesson we gave him was how to change his password. Hehehe
- February 17, 2009 8 comments: