the need to wear eyeglasses 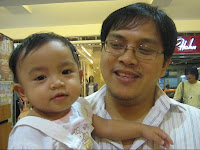 My husband lost his 20/20 vision when he was still in college. He said that it was caused by too much exposure to computers since he was a computer science student back then. At first he thought he was sick when he ended up dizzy, having headaches and felt like vomiting after he stayed in front of the computer for long hours but when he told the symptoms to his mother, she told her that he might have an eye problem. To correct the problem, he had to wear eyeglasses from that time on. His first eyeglasses back then didn't provide the best solution to his needs since he only had ordinary eyeglasses lens but he had already remedied the problem when he bought another pair of eyeglasses that are suited for computer users.

Looking for a reliable optical shop for our specific needs is not that difficult, the internet is a great help to learn more about eyeglasses. As for me, I used to have a 20/20 vision but when I got pregnant in the middle of 2008 and had my eye examination during an annual physical exam, I couldn't read from the eye chart more clearly anymore. Add to that, my work which involved working in front of the computer everyday has rendered my vision in a less than perfect condition. Some say that it was caused by some changes in my hormones. I guess I'll be wearing my own prescription glasses one of these days. How about you guys? Did you ever see the need to wear eyeglasses?
at April 05, 2010 5 comments: