it's really hard to get a good nanny these days. for the last four months, i have kept my patience with dipdip's yaya.

issue no. 1. when we got her to start working the day after we interviewed her, she already asked if she could get an advance on her salary. she said she was indebted to her previous employer and wanted to pay her back. since it's really hard to get a yaya and she seems to give a pretty good impression that she's probably the best nanny we could ever have, we gave her an advance. i thought this would just be a one-time thing but she kept asking for an advance even when we gave her her salary every 15th and 30th of the month. when i finally received a retrenchment notice from my employer, i told her we can only promise her to allocate for her salary from our funds and that she shouldn't expect that we can grant her any advance on her salary. problem solved.

issue no. 2. when i had her interviewed, i told her that i terminated my previous nanny because she can't seem to fulfill her work schedule. she would come back on a monday at noontime even when we agreed that she would come back on Sunday after her saturday off. thankfully, i was still on maternity leave at that time. this time, i expected her not to do the same. but i was wrong. she would leave at dawn on saturday and would keep a trend of coming back on mondays at 4 a.m. she always had reasons for everything. blah blah blah. i was tired of her lame excuses. still, we kept our patience because our monday work was not jeopardized because she would arrive at dawn, although she would really rob us an extra hour of sleep because we would be awakened from our sleep when she comes knocking on our door so early. this went unsolved because she would agree to come back on sunday before she would leave the house and then come back on a monday with a different excuse each time.

issue no. 3. she can't cook for herself. well, she can boil lots of things. and fry a little. so if we can't leave her cooked dinner, she would have boiled eggplant. boiled okra. fried dried fish. mind you, she would drive me nuts because she has a lot of things she said she wouldn't eat. no, i don't eat this. i don't eat that.

issue no. 4. she complains about the cloth diapers. they're washable and re-usable. hubby and i decided to use cloth diapers for dipdip during daytime so that we could prevent or minimize diaper rash. we only want her to use disposable diaper during the evening. she wouldn't directly complain to us. she would either talk to the baby or talk to the yayas in the neighborhood. there was even a time that she would sneak in a disposable diaper inside a cloth diaper. she was embarrassed when we caught her on the act. thankfully, it was the first and the last time that she did that. bottomline, she's lazy. she wants less or no laundry. all we asked her to do was to wash dipdip's clothing, including diapers.

issue no. 5. last week, she left us friday night when she's not supposed to. i knew she's excited to go home for the fiesta and get drunk. she came back on a monday morning looking sick. and pretended to have a cough. she said she has fever but when i took her temperature, it was a 34.6. Liars go to hell! then she told me she had hypertension and would like to go to the health center for a checkup. i had to take a leave of absence to attend to the baby.

when i took charge of the baby that monday, i learned from another yaya that sometimes she wouldn't even put a panty on dipdip. my oh my, how could she do that to my daughter?
what can she expect? give her a raise? we have to stop being nice. we terminated her. now we're still in search for a new yaya. we had to entrust dipdip to my in-laws for the time-being. we're now temporarily going home at stephen's parents in talisay. there, my wonderful daughter is pampered with love by her grandparents. i so love my in-laws!
at August 21, 2009 6 comments:

Email ThisBlogThis!Share to TwitterShare to FacebookShare to Pinterest
Labels: personal

What do dreams really mean? Why do I dream of people and old acquaintances that I haven't met in a long time? Why do they appear in my slumber when I'm not even thinking of them? Why do dreams take me back to my younger days? Back. Way, way back. Back in my native land, San Carlos City, Negros Occidental. Maybe my homeland misses me. Or is it the other way around? I can't seem to figure out why sometimes my dream of a particular person or persons can run for days, like sequels to a tv series. Maybe they don't really mean anything. Maybe they do. But I can't stay around thinking about it. Reality is here.

Maybe I'm just plain tired. I can't write my thoughts any further. I'm going to bed now. And dream again. Of people and old acquaintances I haven't met in a long time. And still wonder why I do. And write about it. Get sleepy. And dream again. Wake up and wonder. And... yeah, I get you. This whole dream thing is going nowhere.
at August 11, 2009 2 comments:

This is so not true! The nine months thing. At least not for me. I thought after I give birth, I will already lose all of that maternity weight but I was wrong. It's been four months+ after the C-section but I'm still not back in my old clothes. Sometimes it would anger my husband because it takes me longer to get dressed. Why? Because I don't like the woman I see in the mirror. I hated everything she wears. Nothing seems to look good on her.

The mirror is no longer my friend. I hated looking at it. My postpartum body (especially my awful tummy) is just so depressing! Well, I tried not to be depressed. Mind over matter still works. Everytime I feel sad about it, I think about my trophy -- my baby! But it doesn't mean that I wouldn't try losing weight or getting back in shape. It just helps in conditioning my mind to be more PATIENT. Sometimes I even overeat especially when the table is overflowing with food. LOL. It's time to change that attitude. I promised myself I will get out of this weight. I can't stay this way. It sucks! I know I couldn't do it overnight. Losing weight is just a little harder to do. But it can be done. 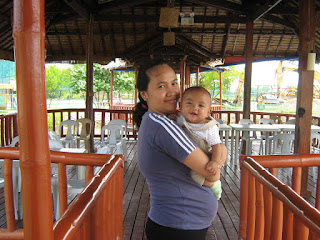 I wanted to delete this but baby pauline is just so adorable in this picture, I decided to keep it. This will serve as a reminder for me to get back in shape. Or I'll die of depression. :)
at August 10, 2009 5 comments:

and so it's goodbye

.... Consequent to the foregoing, we wish to inform you that we shall be constrained to retrench you effective August 31, 2009. Nonetheless, you shall receive all corresponding benefits due to you. Should we be notified of changes in the circumstances necessitating a resumption of the work force, we shall give you preferential priority......


I promised myself not to be overly dramatic. I knew it was coming. My retrenchment. Was it something I expected? Something I looked forward to? Or something I didn't want to happen? I won't divulge my answer to these questions. All I know is that my time has come. I'll be leaving the company in less than a month from now. For five long years, this company has honed me to become the best that I can be. Now it's time to spread my wings and fly. What's in store for me outside? I remember my mom used to tell me things that she learned from the bible. Things which helped me hold on to my faith in God. Now even though mom is no longer present physically with us, I can still hear her telling me these powerful words-- "No sparrows fall to the ground without the will of God." I know He has bigger and better plans for me. It is time to move on.

I'm placing an ad here for all interested employers (wink): Please send your applications to me privately. Previous applicants need not apply. :) Just kidding. I might blog about my quest for a new employer pretty soon. Hopefully, I might try being a WAHM.
at August 07, 2009 5 comments: 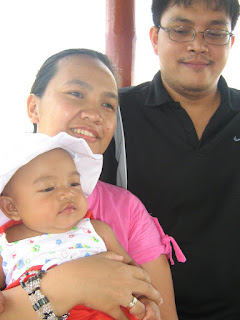 just wanted to let everyone know that i'm still here. you might have not noticed it but i've been gone for almost a month. been so busy. work, motherhood, health issues, laziness, what have you. now, i'm starting to pick up!

i'm back with a lot of stories to tell. happy and sad. hopefully, i get to write about these on my subsequent updates.

first off, i'd like to thank the Designer's Chic for giving a new look to my blog. i never had the time to sit down and learn how to change layouts or design for a blog. i really wanted to have a 3-column layout for my blog. i wanted to learn how it's done but i just didn't have the time YET. thanks to Ivy for the overhaul. this would not have been possible too if it weren't for Jenneth. thanks net for the sponsorship.

right now, i'm just warming up a little bit. see you on my next update. if anyone is still reading me, please let me know. comment to this post, message me privately or send me an e-mail. whatever suits you. :)
at August 01, 2009 3 comments: